The Casa Grande trail system has grown up since I started riding there in 2007. It’s been a few years since I explored the new trails, but I really like the Ridge trail cut a bit higher on the mountain than the original trails.

Read up on the trails at the Casa Grande Mountain Park page, and view a printable Map too.

Download a PDF of the Casa Grande Mountain Trails Map.

My original trail review from 2012

Fun section of CGM. One of about 12 clips from the mountain. Raw footage only. Vholdr mounted to bottom tube of frame. Watch as I dodge cholla cactus.

The soundtrack is tires over rocks… 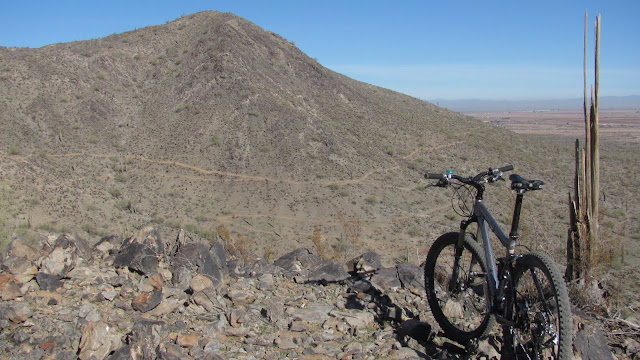 UPDATE: Casa Grande Mountain is getting a facelift…Expert trail builder Mark Flint has been hired by the city to design new trails on the mountain. Flagging started in 2009 and trail building began early in 2010. Read John’s great ride-up of his exploration of the trails.

In July of 2007, I was looking for some fresh singletrack to explore… I searched the MTBR trail reviews and Arizona forum for a new ride. There was chatter about some new trails on Casa Grande Mountain. They looked good on paper and the trail view in Google Earth looked even better. So I ventured out. Some of my thoughts after my first ride:

First thoughts are that this trail rocks. Pristine singletrack no more than 24 inches wide in most places. This morning I had first tracks over some freshly raked trail. It’s the groomed corduroy of the desert.

There are two distinct sections of trail. The north side loops are about 5 miles total. If you ride over the saddle from the north side you enter Phil’s Wild Ride. It’s not really called Phil’s wild ride but it should be. Phil, a Casa Grande local, has built most of the trails over that first saddle that lead to the south side of the mountain.

There are a few different ways to ride the north side loops. A couple of connector trails let you mix-n-match till you find what you like. The trails here are not too technical as they twist and turn up and down the mountain. There are even a couple of nice jumps and two wash bridges to cross.

The south side trails run from the saddle clear down to the south point of the mountain in a Desert Classic-like fashion. They have the look and feel of Wild Horse out in near Hawes with a little bit of Twisted Sister action and a smattering of Pass Mountain. The further south you go the more technical it gets. There are quite a few trails to choose from to get the south point. The East and West Legs are the most technical with Bootleg-esque exposure, steeper climbing and more technical descents.

The locals have built an awesome system in Casa Grande. It’s such a new system that the singletrack is still SINGLEtrack. I feel some serious respect for the trails, knowing that it local sweat maintaining the mountain. My thanks goes out to everyone who have built and maintain these trails. I’ll have to do my part and give back to the mountain.

Last Saturday I met CGCharlie, his wife Doris, and friend Clarence out on the trail. Charlie has built most of the north side trails and continues to clean and cut new ones. Today I met Robert, a local who helps maintain the trails by raking and riding frequently.

Casa Grande Mountain is the best kept secret outside of Phoenix. It doesn’t have to be that way. Spread the word.

Read Chad Brown’s take on the new and old trails. Directions to the Arica trailhead:

Exit 200 Sunland Gin Rd. from Phoenix/Chandler go right, from Tucson go left. First right is Arica rd. it will be after the truck stop. Follow Arica rd. and when you reach the unpaved area you will see signs posted.