This is my ride report from the Tor de 50 a week and a half ago…it’s old news by now. I’m sure by now you’re reading up on all the Old Pueblo reports rolling in. FAIR WARNING: This is a long post. It was a long ride. The pics are at the end. I won’t be offended if peruse the prose and go right to the pictures. Also, if you’ve got the time, check out the Tor de 50 reports from: Scott Morris, Chad Brown, Chuck, and John. They have pictures too. If you just want pictures, check Dave’s photos on Facebook

The moment I signed up I started having second thoughts. The last time I raced was in 2002. But the AES races are more casual, like group rides. There was nothing to worry about, except finishing — not finishing faster than anyone, just finishing. That would be its very own win.

I had been reading about the Tortolitas on Chad and Scott’s blogs for a few years now. But never made an exploratory trip for myself. The Tor de 50 was the perfect reason to explore.

We started at 8 am sharp. The casual neutral start pace was anything but casual or neutral. If this was their casual pace, I wouldn’t see too many riders on this ride…

As we crossed the 77 we were quite the sight. Cars from both directions slowed and actually stopped for the giant peloton of Mountain Bikers to cross the road…why did we cross the road? (Duh, to get to the DIRT on the other side).

Cow Path proved to be just that – if even that. I kept my eye out for the trail and the cactus on either side, trying not to bump tires with the rider in front. I wish I could have snapped some shots on some of the small hills…30 riders single file climbing. It was all I would ever see of the lead group…

I stated talking to a rider named Mark, who was pretty cool. He asked if I was the Mike who had the website. I said, yup, that’s me. Then he passed me.

The trail opened up on a jeep road with a gradual climb headed to the Tortolitas…I started to find a pace, a pace slower than everyone who passed me…but it was my pace. There was a small gathering of riders atop a giant dirt mound. I was going to go around, but decided to try. Fail. That was the first of many more HABs that would await me further ahead…

John Schilling was snapping shots on top. John and I have run into each other several times over the years out on trails. It was good to see a familiar face out there. I started riding with another guy after the mound, from Flagstaff. He said this was his first ride in the desert. He was pacing faster than me so he was gone before I got his name…

It took a while to get there, but finally, the first techy climb begins. I was excited to be climbing something that needed some attention. Before I knew it I had caught a bunch of riders. Our little group made way into the first tech descent. Riders were dabbing and walking all over. I stayed on my bike and passed a good few until I was in the clear. This is where I let out my first wide grin of the ride. This descent was sweeeeet! Fast, chunky, loose, narrow, exposed. Everything came so fast all I could do was keep going down….I thought I tasted a side order of Miligrosa.

At the bottom it was fast jeep road to Moore. I rode with a guy named Mark (a different Mark, the third Mark I’d met so far) through Moore Rd to Dove Mountain. I had already burned through 90 oz of water, with only 70 more, so I knew I needed to fill up from the park that Chad said was only a quarter mile off route on Dove Mountain. Mark decided to join me. By the time we’d ridden a half a mile off route, I was pulling out the Google Maps to see where this park actually was… another 1/2 mile away! By then I had put on 20 miles and the real techy climbing hadn’t even begun yet. I don’t blame Chad for misdirecting us on the mileage to the park though…a quarter mile to Chad is actually a full mile for all other mountain bikers.

Mark outpaced me on the Dove Mountain climb but we met up again just before Upper Javelina. That’s when I said goodbye. I knew he’d be faster than me. And I was right. I never saw him again. I hope wasn’t one of the Mark’s who DNF’d.

Upper Javelina to Mustang was glorious trail. Yes, so much HAB that there just had to be sweet singletrack once we topped out. Parts of this trail reminded me of Olympus (Pyramid Trail) at SoMo. I would love to try ride more of it on a fresh pair of legs. I caught up to Dave and his wife somewhere along the hike. Dave asked if I got a late start. I said nope, I am just slow… Thanks for giving me the benefit of the doubt Dave. We yo-yoed a bit it was good to see him out there.

Just when I started to feel the groove of the climb, a tight corner caught me off balance and I fell right into a prickly pear. Covering my left arm, and “upper thigh” in spines. I rode a few yards further where Noel and Brian were fixing a tire. I removed all the spines I could and would have to suffer through all the ones I could get. Not my first encounter with the desert. The dude from Flag caught us here and stopped to chat. He just had his first taste of the desert, a healthy dish of cholla, as I could see from his bloodied arm. Still in good spirits though, he continued on. That’s all any of us could do at this point, keep going.

The payoff singletrack on the back side was worth every HAB step it took to get there. Noel and Brian were hot on my tail and we yo-yoed a bit before we joined pace for the final climb out. I was teetering on cramps and so was Brian. I knew I had to conserve my climbing legs for 50 year, so I was happy to HAB and stretch my legs. But Noel, he just kept climbing…all the way to the top.

The descent was fast. Felt like the jeep road decent from Gooseberry Mesa down the north side to Zions. Down, down, down. The we hit the big road out. More fast to the 77.

By now I was feeling it. Already 43 miles on the legs. We had a decision to make: Press on or eat tacos…We watered up at a park. I really wanted a Hot dog from Circle K before I attempted the 50 Year portion, but all I could see was an Arby’s. I should have known that I wasn’t so far gone that I would let myself eat Arby’s… Brian was on his way to tacos. Dave and Christy shouted out as they passed us on the road to tacos too… I was tempted, but I came to finish this ride. Noel and I teamed up for the final 14 miles, so I popped a few more Gu Octane’s and we rolled.

After lots of slow climbing we met up with Mike W. on Lago del Oro, just before the Chutes. He teamed up with us, we rocked some clif shots and started the singletrack climb… The Chutes were fun going up, I was mentally riding them down though. Here is where I starting having visions of the Spring Fling 50 Year ride in 2010. Those memories pulled me up the familiar parts of lower 50. It’s such a fun trail, even with 44 miles on the legs, I was riding about the same amount I rode last time I was here.

I guess we were lucky that so many riders has blazed the trail before us. Upper 50 was insanely remote. More so than Cow Path. We at least had tire tracks to follow (GPS too, though sometimes the tires were more reliable than the GPS track). They just kept going up. We rode what we could, hiked what we had to, and kept hoping we weren’t going around the mountain. Nope. Around we went. By now I was energized with the knowledge that the climbing was over. We had a sweet descent ahead and I was going to ride it like I was fresh.

The descent was an absolute hoot. I was so surprised I felt so much energy going down. That’s what the tech does to me I guess. I enjoyed going down so much I ended up talking to myself. The dead giveaway that the downhill is awesome…

Noel got a flat two miles to go, we took some pics and enjoyed the rest. We found Chad’s place at dusk. 10 hours 22 minutes after starting. We were greeted with cheers food! We made it. The party was more of an after the after party party, but the carne asada tacos and beans were as good as I had hoped for. But even if they weren’t, after 10 hours of riding on nothing but gels, Clif Bars, and applesauce, anything would have tasted awesome (except well, Arby’s). 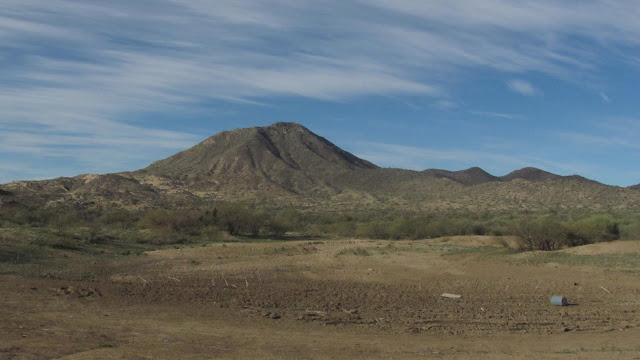 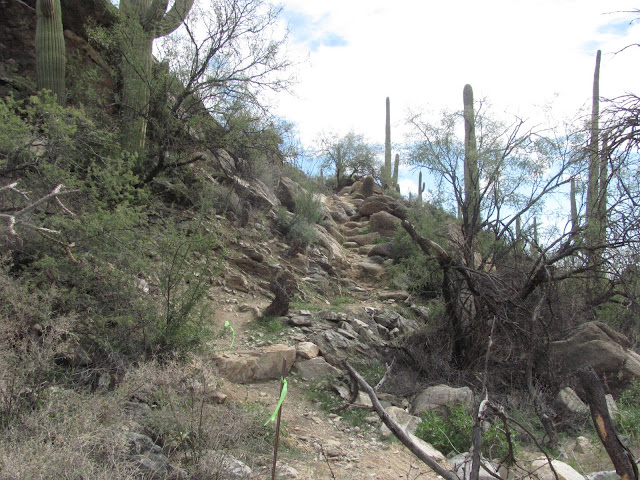 Taste of some HAB 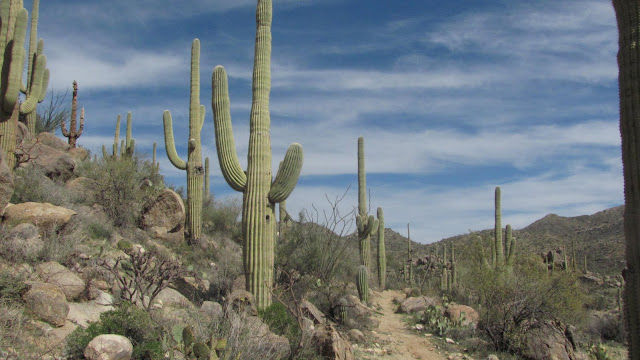 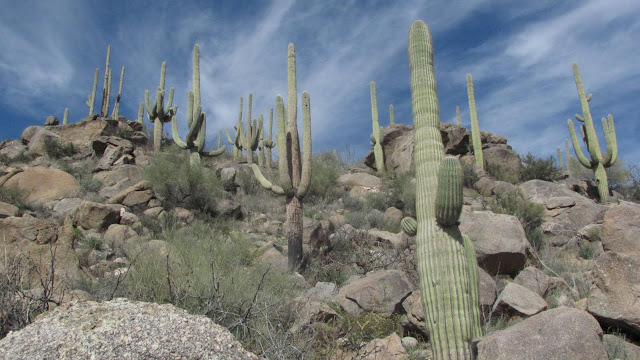 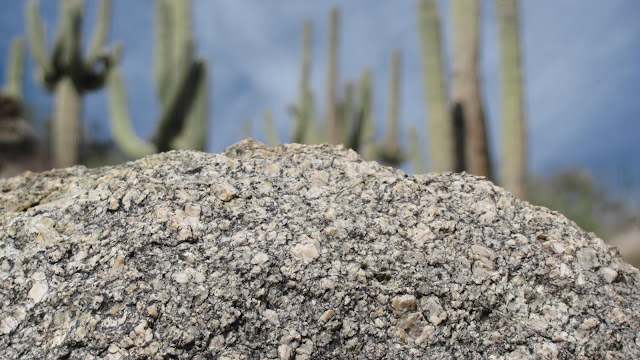 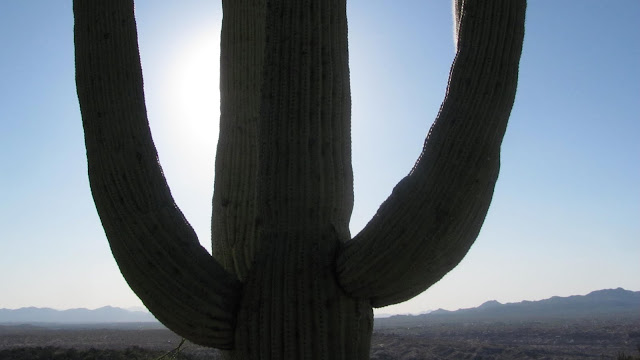 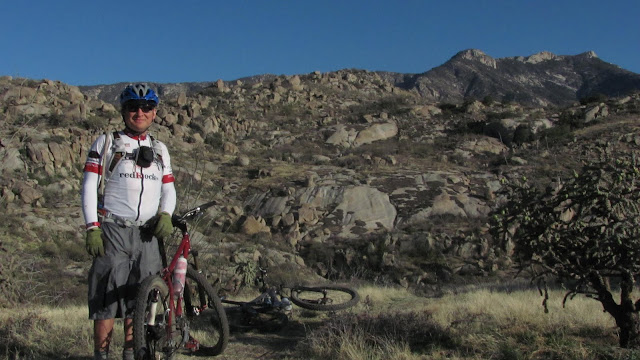 Noel on Upper 50. The smile is because we will be descending soon. 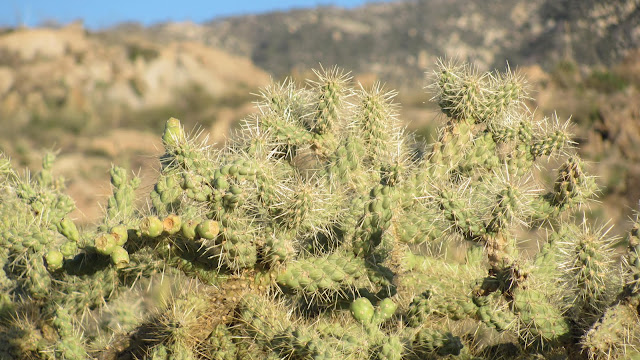 So inviting the desert is. 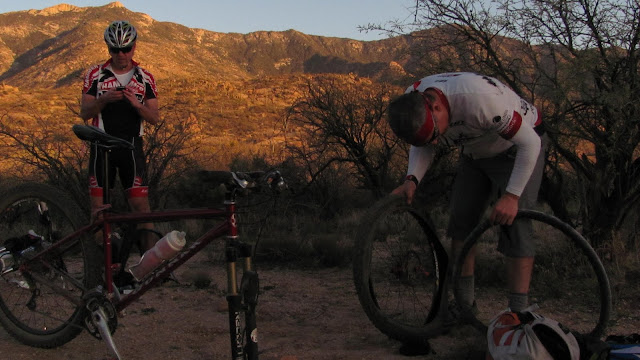 Noel fixing a flat with 2 miles to go…Mike texting updates to his wife. 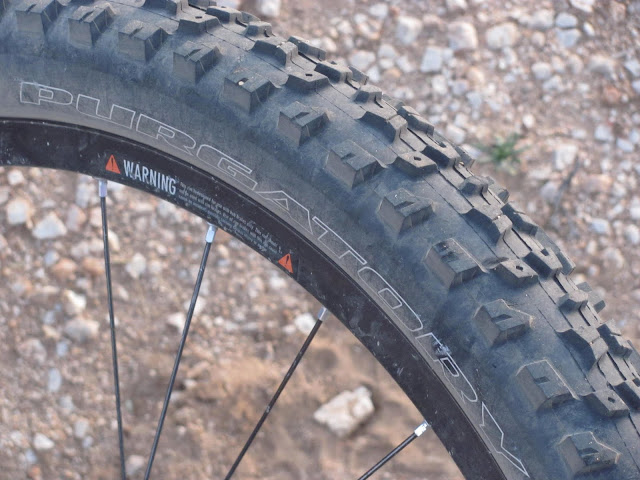 The Specialized Purgatory 2.4. Its maiden run. This tire ate up the trail. Thanks Wilson from Global Bikes for recommending it! 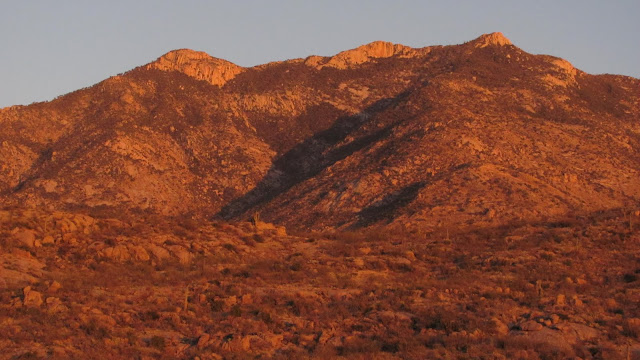